I am so honored that Rhinos in Nebraska won THREE Nebraska Book Awards! The Nebraska Center for the Book and the Nebraska Library Commission give these awards to outstanding books by Nebraska authors, published by Nebraska publishers, or about the state. Of the 14 awards given out, Rhinos received three: Youth Book, Nonfiction: Natural History, and Illustration (congratulations to Matt Huynh!). 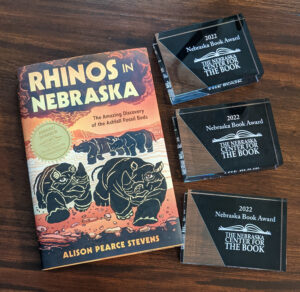